[Jesus said to Nicodemus] For God so loved the world that he gave his only Son, so that everyone who believes in him might not perish but might have eternal life.  John 3:16.

Have you ever wondered about those people who are not Catholic, or Christian, and wondered what happens to them when God calls them from this life? It wasn’t too long ago that there was a general belief that if you weren’t Catholic, good luck! When I was a child, I got the strong impression from my Catholic elementary school teachers that my beloved Anglican (that is, Episcopalian) mother was not destined for heaven but rather….. There was a massive exclusivity about the Church back then. At the very beginning of ecumenism, which did not originate in the Roman Church, when the Catholic Church was invited to participate, Pope Pius XI in 1928 responded: Let, therefore, the separated children draw nigh to the Apostolic See [the Papacy], set up in the City which Peter and Paul, the Princes of the Apostles, consecrated by their blood; to that See, We repeat, which is “the root and womb whence the Church of God springs,”[27] not with the intention and the hope that “the Church of the living God, the pillar and ground of the truth”[28] will cast aside the integrity of the faith and tolerate their errors, but, on the contrary, that they themselves submit to its teaching and government. Would that it were Our happy lot to do that which so many of Our predecessors could not, to embrace with fatherly affection those children, whose unhappy separation from Us We now bewail (Mortalium Animos). Not exactly what those early ecumenical Christians were expecting! What would the good Pope Pius XI make of this: 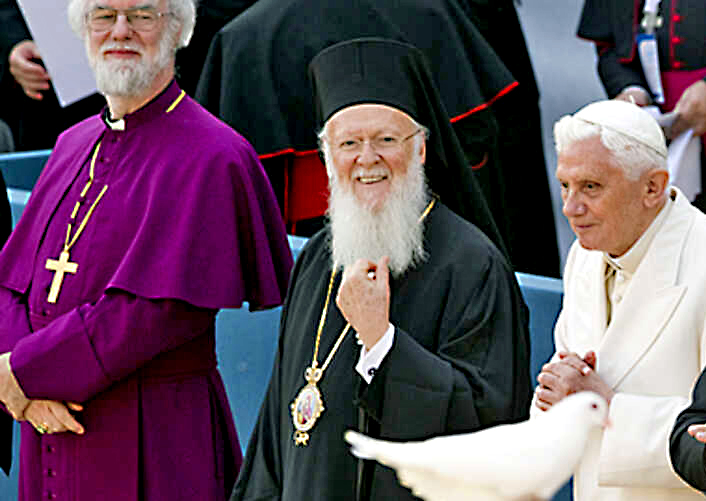 Rowan Williams, Archbishop of Canterbury, Ecumenical Patriarch Bartholomew I and Pope Benedict XVI in Assisi in 2011.

… all coming together to pray for peace in the world, along with other representatives of non-Christian faiths and of no faith at all! It can be safely said that each one of those present believed that their interpretation of God, or Gods, was the closest to the truth, yet they were prepared to come together in a common, true and just cause. Today’s first reading hails the Persian king Darius as “inspired” by God, but he, of course was not Jewish, but he permitted the Jewish prisoners in Babylon to return to Jerusalem and rebuild the holy Temple.  I believe that to be the key to understanding today’s readings. Jesus tells Nicodemus today that God so loved the world that God’s Son was sent into it. In that world today, Christianity is the largest religious group (a little more than 30% of the world’s population in 2010), and the Roman Church is the single biggest church in that group, about 50% of all Christians. But that leaves out the remaining 70% of the world’s population, where there is a whole range of non-Christian belief from the strictest possible, to pure atheism. Sure there must be many who are searching for a belief system with which they are comfortable, but it must be that the vast majority are all sure of their beliefs, and are unlikely to change that.

But Jesus says that God wants all of us to enjoy eternal life, but he then says that whoever does not believe [in the Son of God] has already been condemned, because he has not believed in the name of the only Son of God. And so there is a challenge here; are we to say that all those who have a clear conscience that what they believe is true and just, are condemned? Pope Pius XI was pellucidly clear on that point, and it seems to echo today’s gospel. There is a line in today’s second reading, For by grace you have been saved through faith, and this is not from you; it is the gift of God… St. Paul is talking of faith in Jesus, of course, but is there a little hope here for those who have not even had the opportunity to meet Christ in Scripture, or in other Christians or in any other way? Does the God of love condemn such people to eternal damnation? Karl Rahner, a Jesuit theologian of the last century, wrestled with just such a challenge. For example, he asks: a person lives in the grace of God and attains salvation outside of explicitly constituted Christianity. Let us say, a Buddhist monk who, because he follows his conscience, attains salvation and lives in the grace of God… What is a Christian to make of such an example of faith? Rahner’s answer is, of him I must say that he is an anonymous Christian. An anonymous Christian…. Now there’s a concept to wrestle with. It suggests that God is indeed at work in the whole world, guiding and suggesting, inspiring and even cajoling. And if you accept Jesus is the very identity of God in the world, then non-Christians, according to Rahner, are inspired by God’s Spirit on the basic teachings of the Lord, above all to love God, one’s neighbor and oneself. Now if that is true, then it is a cause for joy and celebration, and today is traditionally called Laetare Sunday, “Rejoice” Sunday, a half way point in Lent, with the softened purple of the priest’s rose vestments sometimes seen, and today’s readings, read in the way suggested here, are indeed a cause of real joy, rejoicing in the Spirit of God at work in the whole work, bringing all who accept and follow her to God and life eternal. 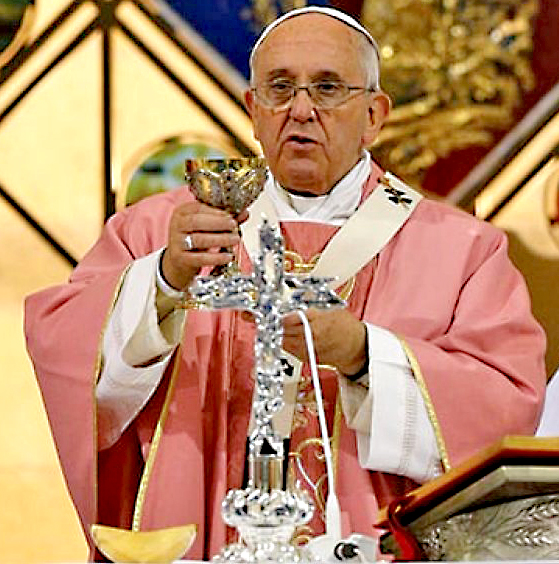