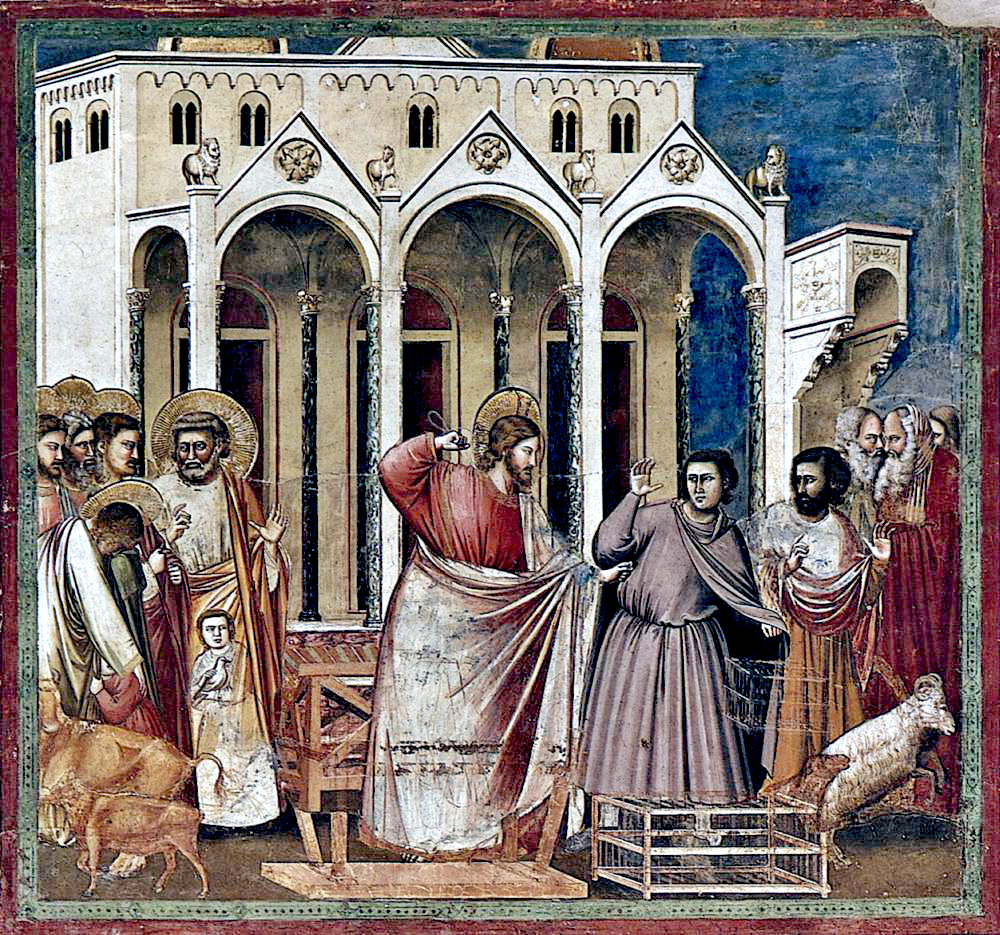 Expulsion of the Money Lenders from the Temple, Giotto 1305, Scrovegni Chapel, Padua, Italy.

[Jesus] made a whip out of cords and drove them all out of the temple area, with the sheep and oxen, and spilled the coins of the money changers and overturned their tables….  John 2:15.

There is a famous story about St. Teresa of Avila gorging herself on a favorite delicacy, partridge. The other sisters were somewhat perturbed by this display of vigorous appetite, and said so. Teresa replied without hesitation, “When I fast, I fast; when I eat partridge, I eat partridge.” Everything in its proper place, one might conclude, and then turn to today’s gospel and apply the same axiom with its stunning vision of the Lord completely losing it, literally whipping those merchants of profit out of the most sacred space in the world. It is so unusual that there are hundreds of pictures of this scene painted by artists over the centuries. It is also found in all four gospels, and not many events in the life of Jesus can claim that. Clearly it made a huge impact on the memories of those who witnessed it, which, to say the least, is not surprising. The experts say there is little doubt that this actually did take place. Jesus, however, was a man of peace and forgiveness! But clearly even he had his limits. What on earth prompted this display of anger? Looking into my own history, I was reminded of an incident some 25 years ago when I was a teacher at a Catholic girl’s school in Brooklyn, New York. The TV news announced that over $1,000,000 has been embezzled from the Brooklyn diocesan pension fund, the very fund that would supply my pension on retirement. When the culprit, an employee of the diocese, was taken to court and pleaded guilty, the bishop requested that no prison sentence be given, which could have been 15 years! Well, that was an angry moment, and I wondered why our bishop had not used the whip! Clearly Jesus saw much more evil on that day in the Temple than the bishop did 2000 years later. Admittedly there were some extenuating circumstances in the Brooklyn case (including the insurance coverage of the loss, and the employee’s promise to restore as much as possible), but quite clearly there must have been none in the Temple incident. That must explain Jesus’ rage and anger. I presume he just saw greed, chicanery and profiteering in the holiest place in the world, enough to turn this supreme man of peace into an avenging angel. But let us always remember that this same man forgave those who tortured and killed him later on. The offence in the Temple he saw as against the Father; his death was entirely personal; the two events were different and called for different responses.

So, this being Lent, what vision do today’s readings suggest as a Lenten reflection? Take a look at the context which includes today’s gospel. The first reading concerns the critical moment in Hebrew history when God offered to be their God, and the Hebrews to be his people. The seal of this bargain? That they obey the Law that God gave them: The Ten Commandments, essentially the basis of western civilization. Then the second reading. That concerns our own, Christian, relationship with God, and we offer a crucified man, unjustly killed for refusing to deny who and what he was. As the reading says, “a stumbling block to Jews and foolishness to Gentiles”. So it’s a bit if a scriptural thicket we are in to make sense of it all. One plan suggests itself, appropriate for Lent. There are moments in life when we are all reduced to fury and resentment of one kind or another. They are not pleasant moments, but they are times where our decisions might well last for years, either good or bad.  The idea here would be to avoid an “if only…” moment. The distinction made above of the two responses of Jesus, in the Temple or on the cross, should be our guide. The fury we might be reduced to on seeing an example of pure prejudice towards an innocent person is one case; that would be a “Temple” moment, where action is called for. On the other hand, if we are the target of, say, prejudice or wrong in any way, that’s where have to be really careful. For example, this picture from 1957 outside Little Rock Central High School, the first day Black students were allowed to attend: 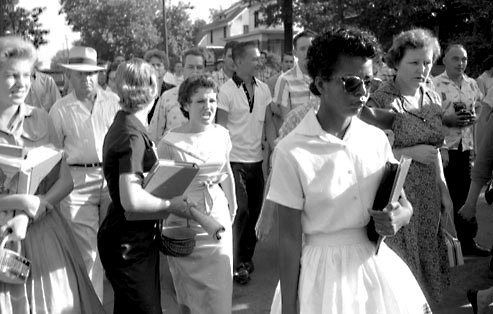 The contrast between the Black girl and the woman behind her could hardly be greater or clearer. That is a moment for justifiable fury and anger in us against such prejudice, calling for action to challenge and prevent such abuse. Hazel Bryan is the abusive student behind Elizabeth Eckford. On the 40th anniversary of this turning point, Hazel met Elizabeth and apologized for that terrible moment, after 40 years of being identified as a person of hate assailing a person of grace. So that is the Lenten moment for us to contemplate. Which of those two models do we – I – tend to be? Now that’s lenten exercise for each and every one of us. But today perhaps whips or anything like it, should be left at home no matter how angry we might be…. 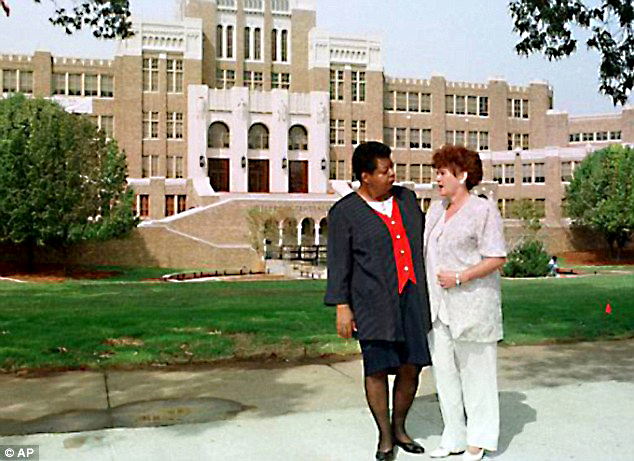