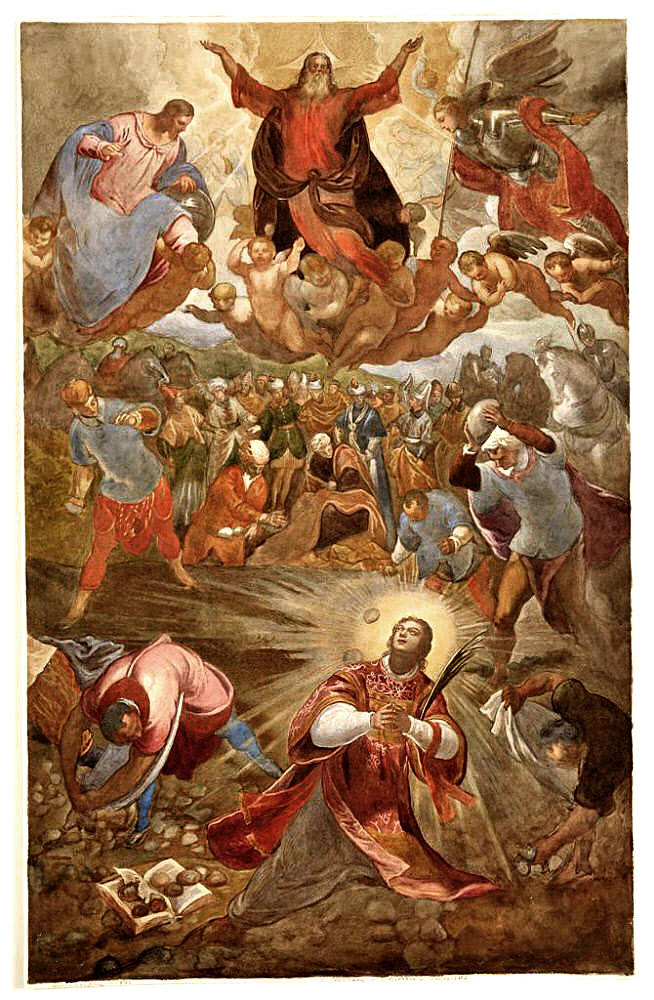 Stephen said, “Behold, I see the heavens opened and the Son of Man standing at the right hand of God.”     Acts of the Apostles, 7:56.

My apologies to those who live in dioceses where the feast of the Ascension is celebrated on Sundays. We will be back in sync on June 9 for the Mass of the Day on the feast of Pentecost.

Today’s first reading is an account of the first person killed because of his faith in Jesus the Christ. Hence St. Stephen is Christianity’s proto-martyr. He had been summoned to stand before the Sanhedrin (the supreme Jewish religious authority at that time) and must have enraged it much more even than Peter who had accused it of killing the Lord, which is incredible in its way. I say enraged, because Stephen was hauled out and stoned to death, the traditional, Scriptural, way of dealing with blasphemy. Only the Romans had the power to execute, so the Sanhedrin completely lost it in their rage and anger. It might have been building up because of the times Peter had stood before them, and the fact that the early Christians were gaining more and more followers, all of them Jews in those early days (except for the crisis which was described in last Sunday’s reading from Acts).  I began thinking about Stephen. That is not a Jewish name, but he was Jewish. Look at Acts 6. The Jewish Christian converts were apparently of two types, Hebrews and Hellenists. The Hebrews were the native Jews from the Holy Land, Palestine. The Hellenists were not; they were from basically anywhere else in the Roman Empire. The lingua franca of the day was Greek, not Latin, which came later (today it is English, spoken in one way or another all over the world). That is the reason our Christian Scriptures are all written in Greek, not Hebrew or Latin. (“Hellenic” means Greek; the Greek for Greece is Hellas). Well I checked the name Stephen. Sure enough, it is not a Hebrew name, but Greek. Look at the passage from Acts which names him and the others who became the church’s first deacons. They were appointed by the apostles to sort out a squabble between these two groups, one accusing the other of favoritism. Stephen was one of those appointed to serve at table and settle the fight which the apostles did not think of as one of their duties. Look at the word “attend” in that passage, διακονεῖν, diakonein. That is the origin of our word deacon, or servant. Hence St. Stephen is not only the first Christian martyr, he is also the patron saint of all deacons to this day, and his feast day is December 26, the day Good King Wenceslas went out to help the poor.

But clearly Stephen was not simply a servant to help in waiting at table and handling disputes, he was prepared to stand by his belief in Jesus to the bitter end, trusting totally in his vision of the Lord waiting for him in heaven. He had recited almost all of salvation history to the Sanhedrin, culminating in the figure of Jesus, fulfilling, in his opinion, all the prophecies concerning the Messiah. And that was sufficient to get him killed. And, strangely, one of the witnesses to this brutal act was Saul, who approved of it. He was later to become St. Paul, bitterly regretting his action to his dying day.

The theme of things Greek, or Hellenic, continues in the second reading from Revelation. Jesus calls himself the Alpha and the Omega, the first and last letters of the Greek alphabet, the beginning and the end, the first and the last. It comes from the conclusion of the Book of Revelation, and in some ways suggests the vision that Stephen had at the moment of his death. But not only was Stephen invited, but each one of us also. “Come” says Jesus, “receive the gift of life-giving water.” The gospel concludes this entire vision presented by today’s readings with the declaration of what is called the Priestly Prayer of Jesus. It reveals the unity of Jesus with the Father, and the bond between God and us, so that in everything we are all one, linked to the Divine and the Divine linked to us, which Jesus calls perfection. Stephen experienced that in his last moments. We are called to accept it and live it in ordinary, regular life, to walk with God and each other in a total bond of unity and perfection. It is a vision which ravishes, strengthens, give hope and courage, and warms us with divine light and love. This window from the 1960s refers directly to the readings from the Book of Revelation. The Lamb of God rests on the book with seven seals, which rests on the New Jerusalem from which healing waters flow. The Hand of God the Father and the dove-like image of the Holy Spirit surround the Lamb, and we believers are all gathered into one by the rays of light and love streaming from God.  And can you find the Alpha and the Omega?