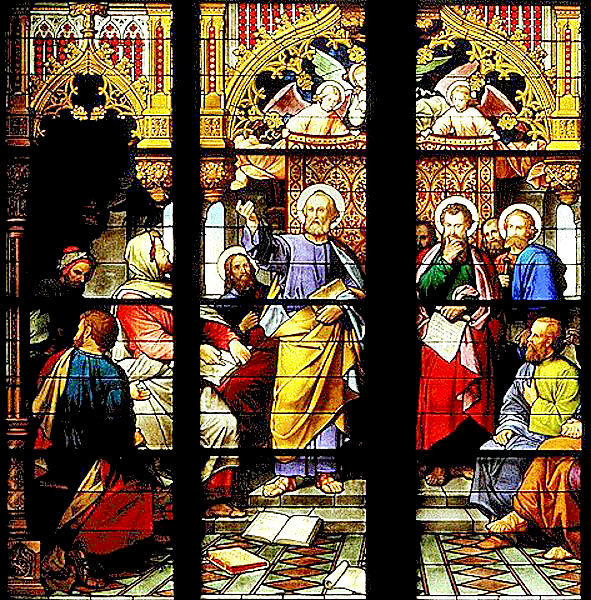 The Council of Jerusalem, Cathedral of St. Peter, Cologne, Germany.

The church is facing an extreme situation right now, with heavy criticism of certain approaches to dealing (or not dealing) with evil actions on the part of priests and bishops. With God’s help, this will be handled and dealt with appropriately, effectively and lastingly. But you may not know that this is the latest challenge to a church which has faced multiple serious challenges over the centuries. Today’s readings reveal the very first challenge, which almost tore the infant Christian community into pieces. It required a meeting in Jerusalem of all the apostles and disciples to figure out what to do. Remember the first commuity which followed Jesus was entirely Jewish, including, of course, Jesus himself. They followed all the Jewish rules and regulations as they had all their lives. Well, the message they preached attracted more than Jewish listeners; Gentiles, non-Jews, also began to listen and become interested to the point of wanting to join up. And there the trouble began. Could Gentiles join the Christian (and 100% Jewish) community? The challenge was based on this: Genesis 17:10-11 clearly and definitively stated that all males following God’s law must be circumsized, and Leviticus 11 lists all the foods which are either permitted or forbidden to all Jews (the origin of the kosher laws), and so on. Well, of course, Gentiles had never followed any of those commands (and one of them would be a significant challenge to any Gentile adult man who wanted to join up!), so the question for the early church was, understandably, should they be allowed in? It provoked strong arguments up to the possibility of schism (breaking up of the church). The danger was so great that a meeting in Jerusalem was called to examine that very question. It has been called The Council of Jerusalem, the first such council in the history of the Christian Church. In this case, revelations to St. Peter especially provided guidance. The Acts of the Apostles 10:9-16 and 17-48 explain why. Briefly, Peter was clearly instructed through divine revelation that all foods were now acceptable to God, and that Gentiles were also acceptable to God as they were. From this, it was clear that God was open to Gentiles being baptized and admitted into the Christian Church, and that has remained the case ever since. A few nods were given to Jewish tradition concerning avoidance of foods associated with pagan idols, and marriage with close relatives which were understandable and acceptable. And so the early church survived its first, but by no means its last, challenge. Note that circumcision was the physical mark that the man was claimed by God. For Christians, that mark is now spiritual, and is made on the soul at baptism, and this of course includes both men and women.

This early event in the Church revealed another truth concerning Christianity which Jesus promised in today’s gospel, “The Advocate, the Holy Spirit, whom the Father will send in my name, will teach you everything and remind you of all that I told you.” The promised event came to be at the first Pentecost of the Church, the Descent of the Holy Spirit. From that moment, Christians have been guided, strengthened and inspired by God’s Holy Spirit, as seen in St. Peter’s experiences and the Council of Jerusalem, from then until now. As Christians, each one of us is never alone. Jesus promised that he would be with us until the end of time (Matthew 28:20), a promise upheld at every Eucharist. So too the Spirit which we received at Baptism, and especially at our Confirmation, is with us always. Our challenge is to remember that reality in bad times as well as good, and to make sure we do not displace God’s Spirit with our own will, which each of us can easily do, especially in times of challenge and pain. But that is the path to even greater misery and unhappiness. Remember that the absence of God is sin… To follow God’s will, clearly seen in the teachings of Jesus, is to be in the presence of God, which one could even describe as heaven here and now, no matter the circumstances, positive or negative. Look at today’s gospel: “Peace I leave with you; my peace I give to you. Not as the world gives do I give it to you. Do not let your hearts be troubled or afraid.” To believe that and accept such peace provides strength and courage even in a world without it. I recall a parishoner many years ago who had just converted. She had terminal cancer, her appearance showed it, ashen and drawn, but her spirit was alive, strong and vibrant. She embraced the presence of God even amid disaster and pain. To be with her was to be in God’s presence! That is the peace and strength we get from our Savior.