Almost 40 years ago, when I was an assistant principal in a Catholic high school, a strange incident happened. Being British and working in an American school, I had two small flags standing together on my desk, the Stars and Stripes and the Union Jack. One morning arriving at work, I noticed the Union Jack had vanished. I asked the Dean of Discipline to find out who and why… And he did. So I asked to talk to the culprit who had apparently been put up to it by his mother. The family refused to speak to me about it. “Why?” I asked. “Because you’re British”. It turned out they were a heavily IRA family (Irish Republican Army which at that time, prior to the Good Friday agreement, was supportive of violent action in Northern Ireland to expel the British). “But I’m a Catholic priest” I said. “You’re British” came the answer back via my Dean of Discipline. “My father was Irish – I have an Irish passport” I protested. “You’re British”. It was a brick wall; I could do nothing. I eventually got the offending article back, but was never able even to talk to the family. It was the one time I have confronted blind prejudice, and it was terrifying, because I could do nothing about it. I couldn’t go back and be reborn somewhere else! In its way it was also a godsend, because it gave me an insight on what so many people may have to go through daily, be they Muslim, or black, or gay or even being a woman!

I say all this to illuminate today’s gospel parable. Jesus quite deliberately labelled the person who helped the man beaten half to death a Samaritan, and this is why. Just like the IRA and the British, the Jews and Samaritans basically hated each other. There is no feud like a family feud, and this was one. Samaritans were Jewish, but… They accepted only the first five books of the Bible as inspired by God. The rest was simply pius writing. They intermarried with non-Jews. They rejected the sanctity of the Temple in Jerusalem in favor of their own on Mount Gerizim. And still do! There is a small Samaritan community in the Holy Land to this day. So no love was lost between the two (which explains several confrontations between Jesus and his followers throughout the gospels – even last week’s gospel where Jesus and his followers were not welcome in a Samaritan village). Meanwhile, back in the parable, it should be noted that two others had chanced upon the suffering man, and walked on, one a priest and the other a Levite, an assistant in the Temple in Jerusalem, two who you would think would have stopped and offered assistance. But did not. You can almost hear the gasp from Jesus’ listeners when he said that then a Samaritan walked by, and stopped…

Now presumably the wounded traveler who was coming from Jerusalem was Jewish, and the Samaritan passer-by probably shared the mutual distrust between the two, but he overcame that on seeing the Jewish man suffering and near death. As for the stricken man, he would be desperate for any help from anybody at that moment with no judgement anywhere. And, note, looking at the quote above from today’s gospel, when Jesus asked his questioner which of the passers-by helped the stricken man, he answered “the one who treated him with mercy”. He can’t even say the despised word “Samaritan”, which anyone else would say automatically in answer to the question. So our modern idea of the “good” Samaritan would conflict mightily with the ancient Jewish idea of those people. So, as I used to do regularly with my students in school, I challenge you to rewrite this parable by updating it: what person would you substitute for the Samaritan who would unexpectedly step up and help? Remember, it has to be a  person with no control over the reason s/he is despised, just like me being born British. And, of course, that is the reason Jesus quite deliberately chose the Samaritan as his hero in the story. We are all children of God, including the Samaritan who certainly acted that way; and we must all act that way,  no matter what. And that can sometimes be a gigantic challenge, but Jesus’ teaching and expectation are utterly clear.

Now there are several other points about this parable which might be of interest. First, Jericho is considered by many archeologists to be the oldest inhabited town or city in the world, perhaps 11,000 years old! Our traveler was journeying from Jerusalem which, though not the oldest city in the world, certainly has claim to being perhaps the holiest city, sacred to Jewish, Christian and Muslim believers. So, in a sense, the traveler was symbolically going the wrong way, from God’s eternal city to the oldest human city! And, as if to rub in that thought a little harder, Jerusalem stands 2,472 feet above sea level. Jericho is 850 feet below sea level, the lowest such inhabited place on earth. Indeed, much of the Jordan Valley is below sea level, as is the Dead Sea. Clearly this has no outlet to the sea, hence it retains all the salts eroded and dissolved by rainfall and carried down to it by the Jordan over the millennia, making it one of the saltiest bodies of water in the world. Nothing living can tolerate that, hence it is truly dead. Finally, the road between these two cities is desolate, bleak, treeless and somewhat forbidding, a prime area for brigands. So there is a strange juxtaposition between life and death in this whole area, perfect for a parable! 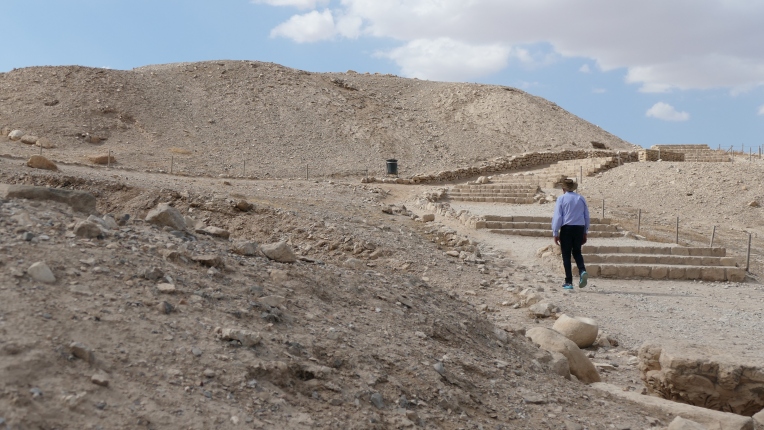 On the road between Jerusalem and Jericho.

PLEASE FORWARD THIS WEBPAGE TO THOSE YOU THINK WOULD APPRECIATE IT. THANK YOU.