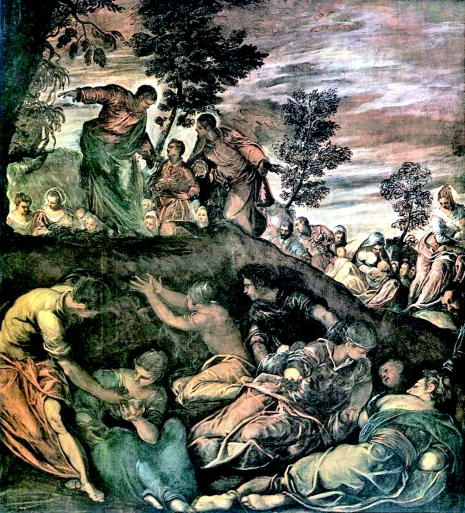 [Jesus] ordered the crowds to sit down on the grass. Taking the five loaves and the two fish, and looking up to heaven, he said the blessing, broke the loaves, and gave them to the disciples, who in turn gave them to the crowds.  Matthew 14:19.

There is a strange dichotomy in today’s gospel. It begins with a report of the death of John the Baptist, the man who had heralded the arrival of the Messiah at Jesus’ baptism, had recognized him as the Lamb of God and had declared that he, John,  was not worthy enough even to unbuckle this man’s shoes. Clearly John was a herald of the good news that Israel had been waiting for for centuries. It was no wonder Jesus wanted to withdraw from everything and everyone and simply grieve. It was not to be. He had entranced the crowds with his teachings which had authority, the gospels tell us, such had never been heard before. Perhaps they wanted to hear about what God wants of us when someone close to us dies. Anyway, they would not leave him alone. Typically Jesus responds with generosity and understanding. Instead of telling them to leave him alone, he performs an action which seems to be an anticipation of the heavenly banquet, the famous multiplication of the five loaves and two fishes to feed a crowd of thousands. Everyone benefits. Tying this in with today’s second reading, not even the death of a dedicated friend and supporter can create a chasm between the Lord and us. If we are prepared to stand with the Lord, no matter what, the Lord will stand with us.

Most of us, very likely, wish never to upset any of our friends and neighbors. The Lord tells us to love our neighbor as we love ourselves, and as we love God. Pretty clear. If we do in fact sinfully create dissention, the road to recovery can be long and tiring. But when we die, whether we like it or not, wounds and pain and weeping and grief might well result among those we leave behind. It probably cannot be avoided. In my own will, I have instructed my executor make sure my favorite hymns are sung at the Requiem Mass of the Resurrection (many of them almost unknown to Catholics in the States, but huge favorites of mine from growing up in England; Christ is Made the Sure Foundation to the tune Westminster Abbey, for example: see below), all verses to be sung so that everyone gets to know them at least by the last verse and hopefully fall in love with them, encouraged by a  professional tenor to join in. Afterwards there is to be a party, a sort of parallel to today’s gospel, I hope (though miracles are not guaranteed). In fact, it all seems to be so much fun (to me) that I’m tempted to have a dry run! As the Requiem Mass says, in death, life is changed, not ended. If we can embrace that, accept it and live this life with it, there should be great comfort when the time comes. Should… Today’s gospel does not tell us about Jesus’ demeanor but I suspect it was not in any way happy; he might have thought that as John’s death was political in origin (it was ordered by King Herod), perhaps his would be too. That is a sobering thought, quite different from the peaceful death I am imagining here.

One final note. Many theologians are very uncomfortable with the notions of Jesus’ miracles. Anything which smacks of direct divine intervention in the normal world invites their skepticism and discomfort. Today’s miracle of the loaves and fishes, for example, is explained away by saying, well, these people would not have gone out into the country without some preparation, such as a picnic basket. In the presence of Jesus, it is said, they are so overcome with feelings of generosity and good will, or at least not willing to munch away surrounded by hungry looks from the others who had not brought anything, that they all shared what they had with everyone. But, you might think, if that were true, wouldn’t even that have been a miracle? Either way, it shows what the presence of the Lord can generate within us and around us. Hence all three readings today hold together very well. Surely a testament of life over death, of hope over despair.

Stretching things a bit, and expanding on that thought a little, and reflecting on the divisions in the Christian family, the light of hope, the presence of the Holy Spirit, even shines there occasionally. On 17 September 2010, Pope Benedict XVI, visiting the United Kingdom, was invited to a prayer service in Westminster Abbey, one of the central shrines of the Church of England. Together with Dr. Rowan Williams, the then Archbishop of Canterbury, head of the Church of England, the service began with my favorite hymn mentioned above….. (words to be found in the prayer service you can access here). This strikes me as a hopeful sign of Christian unity, just as the crowd in today’s gospel was unified in seeking the Lord out and hearing his message and acting accordingly. 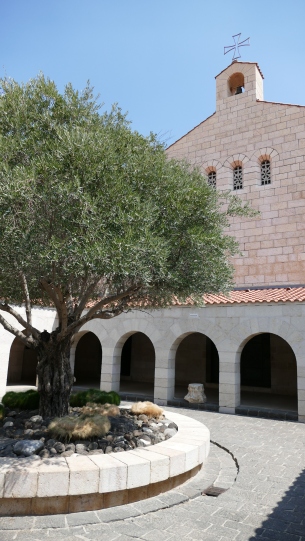 Church of the Feeding of the Multitude, Galilee, Palestinian Authority.