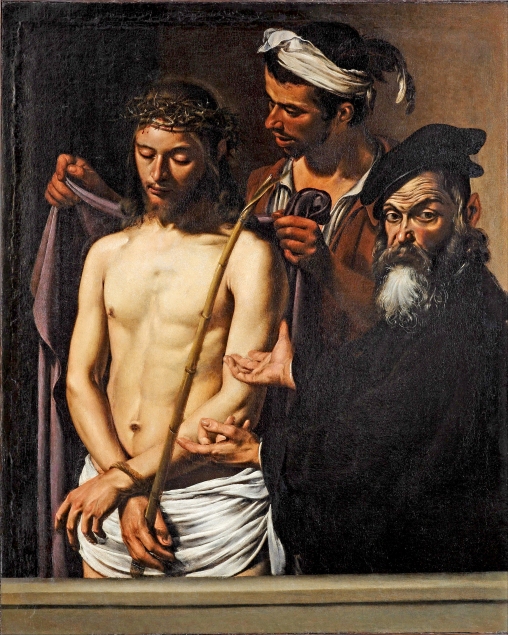 Once more Pilate went out and said to them, “Look, I am bringing him out to you, so that you may know that I find no guilt in him.” So Jesus came out, wearing the crown of thorns and the purple cloak. And he said to them, “Behold, the man!” When the chief priests and the guards saw him they cried out, “Crucify him, crucify him!”    John 19:4-6.

Could there be any greater contrast between this image of the Lord and that from last Sunday when he entered Jerusalem in triumph? From adulation to contempt in five days is, at the least, remarkable. At most it is the resounding fulfillment of the prophecies in Scripture, especially and completely that found in Isaiah, read as today’s first reading. Those verses are so uncannily accurate that it seems almost to suggest a script for today’s horrifying drama. A man utterly innocent (as Pilate clearly knew) yet condemned to an unspeakable fate. On the other side there was a storm of hatred from a people who considered themselves cruelly misled and betrayed by a man they had hailed as their liberating hero. This was God’s chosen, they thought, who was to restore them to the glory of David’s kingdom, even more keenly felt as this was the time of Passover which celebrated God’s rescue of their ancestors from slavery; what better time for their hero to arrive and defeat the hated Roman occupation force? But no: their hopes collapsed in the farrago of hate and condemnation.

For Christians, this was the moment Jesus took the whole weight of the world’s sinfulness on his shoulders, our sins, for he was sinless. He could have walked away from this shame and degradation by simply denying all that he had taught, and denying any claim to be the Son of God. That would have meant the end of his mission, a humbling return to Galilee, never to be thought of again. But he did not deny any of his teachings, and for that he was put to a shameful, hideous death, the wage of our sin. As Isaiah says, “through his suffering, my servant shall justify many,
and their guilt he shall bear.” Hence to deny the forgiveness that we experience through the love of God is to deny the very passion of Christ. It was for this that he came into the world. By dying for what he taught and demonstrated, he proved the truth of his mission, a mission of forgiveness and love. We benefit from his suffering. Again from Isaiah, “Yet it was our infirmities that he bore, our sufferings that he endured, while we thought of him as stricken, as one smitten by God and afflicted. But he was pierced for our offenses, crushed for our sins; upon him was the chastisement that makes us whole, by his stripes we were healed.” Hence Jesus’ last words according to today’s gospel, “It is finished.” His mission, his vocation given by God at his baptism, was complete. Then silence.

“It is finished”, Public Domain Pictures.net.

The reflection on the event of the Lord’s Resurrection will be posted tomorrow.