The LORD said to Abram: “Go forth from the land of your kinsfolk and from your father’s house to a land that I will show you.    Genesis 12:1.

Today’s first reading, from the 12th chapter of Genesis, is arguably one of the most significant passages in all of Scripture. Many scholars have said that the previous 11 chapters are predominantly theological, not historical. They record the thoughts and reflections and handed-down stories of how everything began. That is not to say they were human invention; no – they are all inspired by God to allow us to understand why things are as they are today. That explains, for example, why there are two creation stories, not one. These early chapters also offer us an explanation as to why we sometimes become alienated from ourselves (seen in last Sunday’s readings, where Adam and Eve clothe themselves which was the first result of their disobedience) which may lead ultimately to self-hatred and  worse; alienation from each other (seen where Adam blames Eve to explain his action, demonstrating alienation neighbor from neighbor, which might possibly lead to hatred and worse), and so on, all because of our disobedience of God’s commands. These creation stories are profoundly wise and true from a theological point of view, but not from an historical point of view. That is why Genesis 12 is so important: it is here that God enters human history directly. Here is God beginning to instruct us in the right and proper way to lead our lives in the here and now. Now, God’s intervention was not random, such at spinning a globe and sticking a pin in it somewhere to begin. No; it was deliberate and almost certainly in reaction to the time and place. The man whom God approached was no spring chicken; Abram was 75 years old (Genesis 12:4). His barren wife Sarai was perhaps about 80 at that time. They lived in Haran, northern Mesopotamia. God told the old man to pack up everything and move to Canaan, a country to the south of Haran, on the Mediterranean coast, about which Abram had no knowledge. God promised land and ancestors to him, despite his wife being barren. Abram believed, and moved. Now Canaan (and several other locations in the Mediterranean area) at that time believed in and worshipped brutal and, they believed, powerful gods. I say that because child sacrifice was an accepted practice at that time. It is my belief that this was what prompted God to enter our human history. That ancient people thought they were doing the right and proper thing in accepting a very high “price”, sacrificing their children, when they asked for, or tried to “buy”, a great favor of the gods (among them Moloch), such as delivery from invasion or famine, or, alternatively, to keep them happy. It was logical, but contrary to our God’s will, but this was a God unknown to them. God would change all that by guiding a new people in their midst, the Hebrews, in ways which were also new, but this time reflecting God’s will in the midst of pagan belief. It took time to wipe out child sacrifice, echoed in the acceptance, for example, of Abraham obeying God’s command to sacrifice his only son Isaac. God’s last second prevention of that revealed for the first time the divine abhorrence of the practice.

Now look at today’s second and third readings. They reveal culminating results of that long, 2000-year history of the Hebrews, guided by the prophets and living by the divine Law of God. Paul talks of God who “saved us” , who “called us to a holy life” which ties directly into the first reading (as expanded here). The gospel’s account of the transfiguration of Jesus, appearing with Moses, personifying that same Law, and Elijah, representing the prophets who announced it, is the culmination of that 2000-year history, with none other than the Son of God standing in their, and our, midst. The Hebrew people had become the Chosen People, and were now ready for the arrival of divinity in their midst. There is a great peace and tranquillity to these readings. They reveal God’s greatest gift to us, his only Son, who freely and willingly invites us to eternal life and happiness in his company. Compared to the ancient Canaanite practices, how different could any two situations and times be!

The Lenten lesson here, perhaps, is a reminder of the evil of which humanity is capable. Each of us is able to upset that peace and tranquillity by destroying the law of love which puts God’s will for us first every time. We won’t be sacrificing children of course, but we are able to kill God’s will and substitute our own will in its place, sacrificing our own guardian angel as it were, representing God’s life in our own soul, for our own selfish ends. This is the time of the year to look at that possibility in the face, and if we find it there, resolve to deal with it. 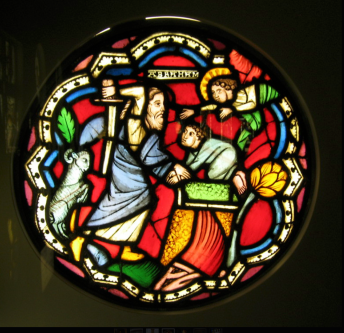