You can see Sunday’s Mass Readings by clicking here.

Abraham said, ‘If they will not listen to Moses and the prophets, neither will they be persuaded if someone should rise from the dead.‘   Luke 16:31.

Continuing the theme from last Sunday and the one before, Jesus teaches us the importance of wealth and the obligations it imposes. Today we have perhaps the most direct, unmistakable and unambiguous teaching, or parable, of the lot. Lazarus lies helpless, starving, disease-ridden and ignored at the gate of the wealthy Dives (pronounced Dy-vees, the traditional name given to the rich man, though not found in Scripture). Each, when called from this life, goes to the opposite situation for eternity, Dives to suffering, Lazarus to paradise. It could hardly be clearer. If we have the means, we are under divine orders to help those who do not, and woe betide those who do not so act. Period.

(It seems Sudan, Angola and a few others were not included).

So it does seem that helping others is very well obeyed in many parts of the world. Getting a little closer to home, how about the Christian churches in the USA: how much do they receive from their faithful? The Giving Institute has calculated that an estimated $358.38 Billion was donated to charity in the USA in 2014. This rose to $410.02 Billion in 2017, the first time that figure had gone over $400 billion. A significant proportion of this was done through donations to the various Christian churches. I wondered how the Catholics had fared here. The Roman Catholic Church is the biggest single Christian church in the USA. It is difficult to find figures less than  five or six years old, but back then Catholic church membership was reckoned at 68 million, with the second largest, the Southern Baptist Convention, at 16 million. Both have declined since then for various reasons, though scandal and betrayal have almost certainly played their parts. One survey tells us that “There are still a lot of buck-a-week Catholics: Catholics give less than 1.2 percent of their income to the church, about half of Protestant giving levels.” Other sources support that conclusion: “Compared to Protestant affiliation, both Catholic affiliation and Jewish affiliation reduce the scope of average giving, when other influences are held constant.” (Philanthropy Roundtable). So today’s gospel might well be aimed at us! Pope Francis recently threw out a challenge to us all, saying that charity is not simply putting money in the plate to calm the conscience; it must also be active love of neighbor in some way.

So, given the facts, and placing today’s gospel alongside them, each one of us is called to examination of conscience. Are we in fact doing all we should as Christians to respond to God’s call to love our neighbors as ourselves? I for one must be honest with myself and wonder what more – and how – I can do in this regard. It is not easy, but it is essential. To provide a moment of quiet contemplation, here is a website which might help, with music actually inspired by the story of Dives and Lazarus. The great English composer Ralph Vaughan Williams, inspired by today’s gospel and a traditional English folk melody, wrote this piece of music, Five Variants of Dives and Lazarus. The pictures reflect the English countryside.

The melody also fits with this hymn, also reflective of today’s gospel message:

I heard the voice of Jesus say, “Come unto Me and rest;
Lay down, thou weary one, lay down Thy head upon My breast.”
I came to Jesus as I was, weary and worn and sad;
I found in Him a resting place, and He has made me glad.

I heard the voice of Jesus say, “Behold, I freely give
The living water; thirsty one, stoop down, and drink, and live.”
I came to Jesus, and I drank of that life giving stream;
My thirst was quenched, my soul revived, and now I live in Him.

I heard the voice of Jesus say, “I am this dark world’s Light;
Look unto Me, thy morn shall rise, and all thy day be bright.”
I looked to Jesus, and I found in Him my Star, my Sun;
And in that light of life I’ll walk, till traveling days are done. 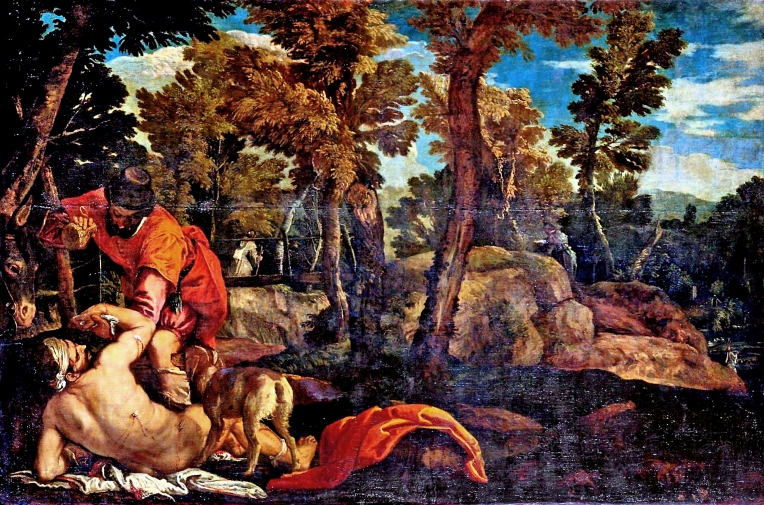 Apologies for this week’s late delivery.