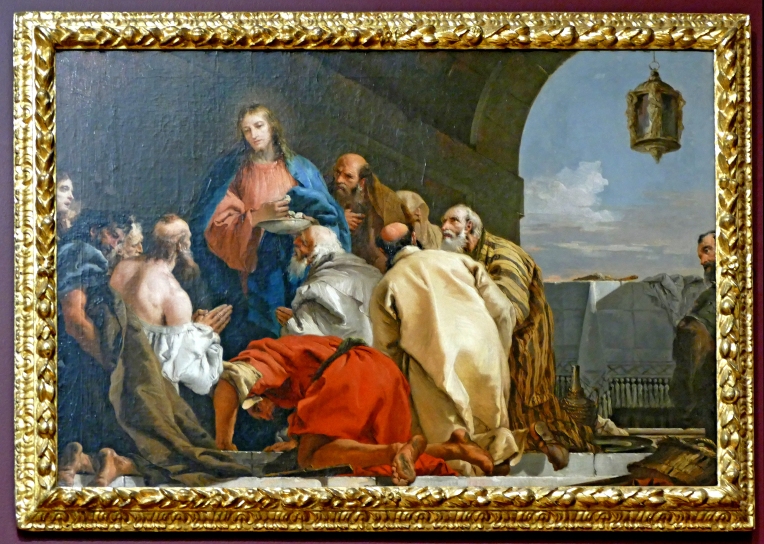 The Institution of the Eucharist, Tiepolo 1753, National Gallery of Art, Copenhagen, Denmark.

Jesus said, “If anyone comes to me without hating his father and mother wife and children, brothers and sisters, and even his own life, he cannot be my disciple.”  Luke 14:26.

“If I’ve told you once, I’ve told you  thousand times”…. “Oh my, this shopping weighs a ton” … “If I said that at home my father would kill me” … “Your husband is as thin as a rake”. A thousand times? A ton? Kill? A rake? I wonder what the world would be like without hyperbole; certainly duller, less vivid, more boring. How about this:

“Neptune’s ocean wash this blood
Clean from my hand? No. This my hand will rather
The multitudinous seas incarnadine,
Making the green one red.”     Shakespeare, Macbeth, Act II, Scene II.

Over-exaggeration has been around for a very long time, and it seems to have found a home in today’s gospel. But this is a hard passage nevertheless. Jesus seems to be saying it is a prerequisite to hate just about everyone before one can become a Christian! Clearly the literal meaning cannot be taken as Jesus’ real meaning. But a scene from Robert Bolt’s masterpiece A Man For All Seasons comes to mind. Thomas More, ex-Chancellor of England, once the most powerful man in the kingdom after the king (Henry VIII) himself, is confined to the Tower of London for refusing to swear to the Act of Parliament acknowledging Henry to be head of the Church. He will not say that; he simply refuses to sign the document stating it. To deny it out loud would be construed as treason, the penalty for which is death by hanging, drawing and quartering. Imprisonment is the punishment for refusal to sign. But his family is allowed to visit him. They have been allowed on condition they try to convince More to sign on the dotted line. He refuses. His wife and children think he must hate them for so refusing. Not so; he, a lawyer, states that if there were the slightest little chink in the Act which would allow him to sign, he would, and then be would be back with them. There isn’t: it’s watertight. If he signed it, he would be betraying that which he holds dearest, his faith in Jesus and his vicar on earth, the Pope (still one of the Pope’s titles to this day). He holds true to his belief, is found guilty of treason in court as a result of a witness’s perjury, is condemned, and is executed (commuted to beheading). Did he “hate” his family? Very clearly no. Might it look that way? Possibly to someone not familiar with true belief, but it would not be true.

I believe that Thomas More’s faith is the type of faith Jesus is talking about today. Are we prepared to go to the wall in defense of our belief in him? All the church’s martyrs have through the centuries. Have they all hated those dearest to them. It would be nonsense to think so. But in today’s teaching, it is clear that Jesus expects us to be rock solid in our belief, which is not hyperbole! And that is the challenge thrown at us this Sunday. Is there within each of us a permanent, absolute faith in the Lord which nothing on earth could move? It is said that only at times of great challenge, whatever it might be: terrible illness, unexpected death of someone close, financial ruin, whatever, it is only then that any one of us knows if we have such faith. Let us pray that none of us ever has to go through such a trial (we pray for that every time we say the Lord’s prayer). But it is crystal clear what Jesus’ expectation of us is at such times. He comes first, last and always, no matter what, as seen in today’s illustration above. The focus is on the self-giving Jesus surrounded by faithful companions, save for the one at the right hand side, who has chosen another path. The other two readings seem to flesh out the implications of today’s gospel. The Book of Wisdom states clearly that the things of this world, its worries and concerns, are real and might obstruct the vision of heaven.  But if we can rise above them, then, according to the second reading, written apparently by Paul when an old man, a prisoner and awaiting death, anything is possible. Paul is sending his servant (possibly a slave) back to Philemon even though he needs assistance in his old age. But Onesimus is clearly more than a servant; he has been instructed in the faith of Christ and is now a disciple able to bring others to the freedom of Christ. Hence Paul would have thought himself selfish to have retained him. He is able to rise above that, and think of others. Hence focus on Christ seems inevitably to lead to the needs of others and the challenge that offers to each of us. And at that point, we return to Jesus’ teaching. We should sit down and think about our commitment to him. Just like the man building a tower or a king figuring out how to deal with a threat, Jesus seems to be saying that we, like them, are called to estimate our commitment to the Lord and whether we can indeed rise to the occasion. 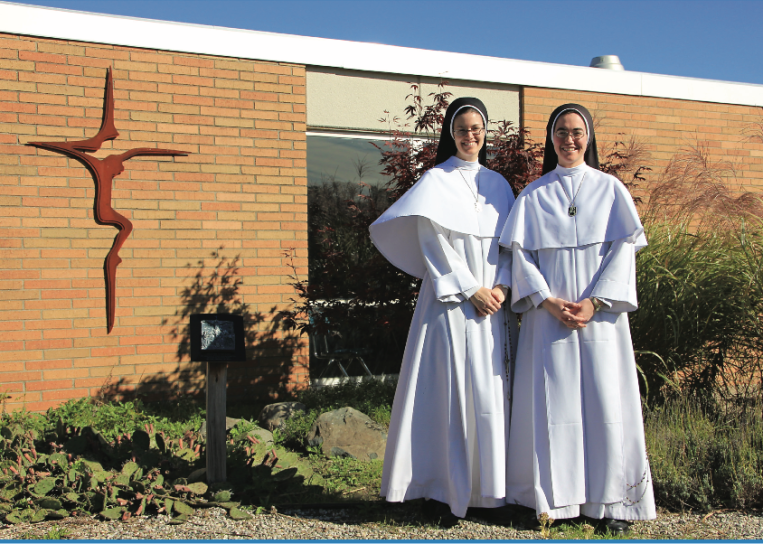