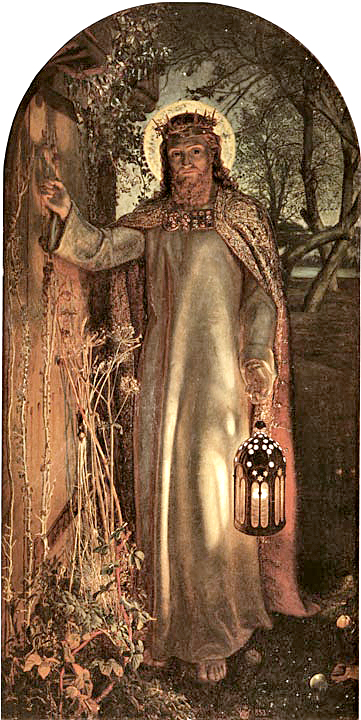 The Light of the World, Holman-Hunt 1852, Keble College, Oxford, UK.

Click here for the Readings for the 13th Sunday in Ordinary Time.

Today’s gospel is set in Samaria, a small nation between Galilee in the north where Jesus was from, and Jerusalem to the south. Samaritans were Jews, but…. As with any dispute, those within the family are probably the worst. Here we have such an example. The Samaritan bible, for example, consists only the first five books, the Pentateuch, namely Genesis, Exodus, Leviticus, Numbers and Deuteronomy. All the other books of the Old Testament were rejected by Samaritans as not being divinely inspired. Also, Samaritans rejected the idea that Jerusalem was the location of the temple. Their holy mountain was, and remains for them, Mount Gerizim, and their temple was built there (though, like the Jerusalem temple, it was eventually destroyed). So any mingling of Jews and Samaritans was forbidden, hence the frosty reception described in today’s gospel. But this was difficult, as Jewish travelers to Jerusalem from the north either went straight through Samaria, or had to take a long way round to bypass it. For most people then, they had to interact in order to buy food and lodging. But note in today’s gospel the reaction of Jesus’ followers to the Samaritan refusal to allow them to prepare a reception; they wanted divine fire to destroy them! Jesus, not surprisingly, calmed them down and they all moved on to another place. Jesus’ reaction to being among Samaritans is nothing like that of his followers, or, indeed, any average Jewish person of that time. Remember one of Jesus’ most famous parables involves a hero Samaritan taking care of a wounded Jewish man. Imagine the reaction to that story when first heard!

It is perhaps not a coincidence that Jesus seems a little depressed there in Samaria when he said he had no place to lay his head. On the other hand, it was in reaction to someone who declared he would follow Jesus anywhere, so perhaps it was a warning that things would not necessarily be rosy when following the Lord. Anyone who has had the courage to stand up for what is right in a hostile context would certainly agree with that. Then the final words today are a statement about what to expect and what to do as a follower of Jesus. It requires complete dedication and absolute trust that in what you are doing is correct and right. The second reading elaborates on that theme. We are free to do anything we like, a gift from God; we are a free people. But how we use that freedom is what counts. Will it be to gratify ourselves or serve others and God? And I think that is the core of today’s reflection. The readings remind us that we are here for a purpose; there is a blueprint created by God. We can chose to follow it or tear it up. Ultimately it is to decide if we treat ourselves as god, or look to the real God as God. On paper it sounds like an easy decision. But Jesus himself tells us of the potential challenges in taking such a path. However, that path, long and difficult though it may be, is the path to self-fulfillment as a child of God and in the end union with perfect love and happiness. So the path, as Jesus states, is to be as straight and true as the path of the plowman; deviate, look back, run off to do something else, and the results will be a disaster. Stay the course, and the harvest will be great.

One thought on “30 JUNE 2019: THE THIRTEENTH SUNDAY IN ORDINARY TIME.”