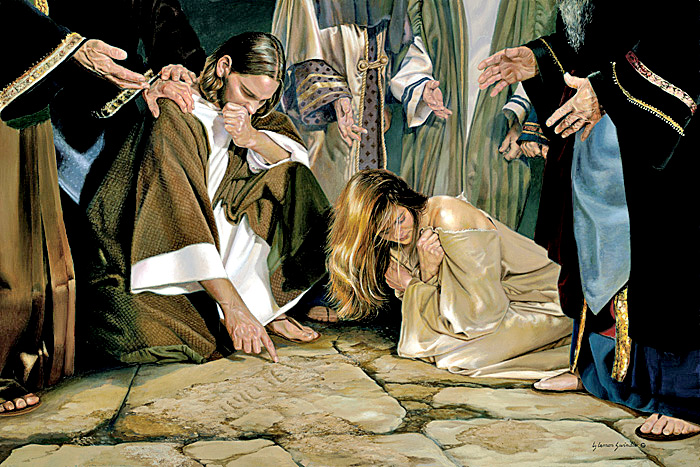 He That Is Without Sin, Liz Lemon Swindle, Repartee Gallery.

[Jesus said] “Woman, where are they? Has no one condemned you?” She replied, “No one, sir.” Then Jesus said, “Neither do I condemn you. Go, and from now on do not sin any more.”

Leviticus 20:10 is quite clear on the point: If a man commits adultery with another man’s wife—with the wife of his neighbor—both the adulterer and the adulteress are to be put to death. We don’t hear too much of that command from those who accept the literal words of the Bible without question, but there it is. Every now and then I would ask my class in my all-girls’ school to turn to Deuteronomy 21:18-21, where a rebellious son, after his parents have complained about him, should take him to the city gate where they live and “…all the men of the city shall stone him to death with stones…” (v.21). Great was their delight, shall we say, especially those with brothers. And today’s gospel has just such an example of the working of Leviticus. The woman had been caught red-handed disobeying the law (and one might reasonably ask, where was the man she was with???). The penalty was absolutely clear: death. A group of very self-righteous teachers in the Temple had brought her to Jesus. They asked Jesus what would he do. There was an agenda behind the enquiry with nothing to do with the woman. It was a trick question. If he answered “yes, the law is clear, execute her”, he would be accused immediately of hypocrisy, as he constantly taught that we should love our enemies, forgive those who have offended us, do good to those who insult us, and so on, and his ministry would be severely compromised if not destroyed. But if he said “release her”, he would instantly be accused of disobeying the law, and the penalty for that was also death. So, instead, he knelt down in silence and wrote in the dust, the only time in Scripture when Jesus wrote anything, and we are not told what it was! There have been 2000 years of suggestions, but no-one knows. In the breathless silent moment, they continued their questioning, “What do you say we should do?” Then the brilliant response, taking everyone by total surprise, with Jesus telling them to go ahead and fulfill the law, but only those completely sinless should cast the first stone, (as only the sinless have the moral authority to punish the sinful). Stunned silence. If any one of them had picked up a stone in that small community, the others would have instantly reminded him of some sinful action of which he was guilty and of which they were all aware (there are no secrets in small communities). No-one could run that risk, and away they went, “beginning with the elders” (I wonder why?), leaving Jesus and the unnamed woman alone. He, of course, was the only one there without sin, and it is unimaginable that he would pick up the first stone! Instead he gave the woman a second chance, an invitation to reform herself. Note she did not ask for forgiveness (or offer thanks), and Jesus does not seem to give it, simply telling her not to sin again. She leaves.

So this was a “damned if you do and damned if you don’t” situation which was handled superbly well by our Savior. He effectively managed to get a group of savagely resentful men who disliked him intensely to reflect on their own lives instantly, see the sin there, and be reduced to silence and impotence. It was a very clever response, leaving Jesus spotless and morally very strong, but unhappily strengthening the hatred among those he had bettered. But what of the guilty woman, who seems to have been a pawn in all this? Had these men been really obeying God’s word, the man she had been caught with would also have been hauled to this “trial”. The fact that he wasn’t seems to suggest that they were more interested in challenging Jesus than fulfilling the law (which, by the way, contains quite a few capital crimes). This story comes from John’s gospel, which is not known for this type of situation. In fact, many scholars say it is not part of the original gospel, and some Bible editions today either omit it or place it somewhere else. But it clearly fits into the picture of a forgiving and loving Son of God. It also distinguishes Jesus’ message from the law of the Old Testament. In fact, many scholars look to Jesus’ act of writing as a “digitus Dei hic”  (the finger of God is here) moment, when the new law superseded the old. The 10 Commandments were understood to be written by the finger of God and are still accepted and obeyed 3000 years later; now here is the new law expanding on them, also written by the finger of God, becoming the new law, the heart of which is love.