Jesus summoned the Twelve and began to send them out two by two
and gave them authority over unclean spirits.
He instructed them to take nothing for the journey
but a walking stick – no food, no sack, no money in their belts. They were, however, to wear sandals but not a second tunic.
He said to them,
“Wherever you enter a house, stay there until you leave…” Mark.6:7-10.

Jesus must have been a pretty affable fellow. He was invited into the homes of the religious leaders (witness him in the home of Simon the Pharisee, at which a woman washed Jesus’ feet with her hair, traditionally taken to be Mary Magdalene, Luke 7:36-50) as well as social outcasts, the lowest of the low (witness dinner with the hated tax collector Matthew, Matthew 9:10-13). People were obviously comfortable with him, and he responded accordingly. He clearly expected his followers to be equally welcomed, as evident in today’s gospel. He fully hoped, or even expected, people to welcome his disciples into their homes and listen to them, and for his disciples to help those who welcomed them. All this might well be taken as the height of his ministry, success was clear from the glowing reports his friends brought back to him of their successes. Things were going well. But, as ever, there was a dark side, and Jesus told them how to deal with that, should they encounter it, by “shaking the dust off your feet”, or, in the words of the song, “Pick yourself up, dust yourself off, and start all over again” (Swing Time, RKO Radio Pictures, 1936). In other words, never be broken by a negative situation.

That same message is clear in today’s first reading. Amos the prophet seems to have encountered just such a dispiriting moment. God sent him to warn the people in the town of Bethel, in the northern kingdom of Judah, that their worship of idols and other actions displeasing to God were to end. As you can see from today’s reading, he was basically thrown out and had to return to his native southern kingdom of Israel. So he wrote down his message so they could read it instead, the first of the prophets to do so, and the model used by the far more illustrious prophets who followed him (Isaiah, Jeremiah, Ezekiel). His terminology, especially the mention of “sandals” seems to have been remembered by Jesus with reference to what his followers could wear, and what they should do if they, Like Amos, met with hostility.

So it seems that the message for us today is how to respond appropriately both to success and failure. The disciples preached repentance and helped many people, and in another place in the gospels. they returned to Jesus praising God for their success. Jesus, a realist, tells them what to do in the face of rejection. It is symbolic, non-violent and crystal clear. Just move on to another place and don’t give up. As believers in the Christian way of life, this applies to us also. Each in our own way responds to God’s call – or vocation – to be Christ to the world by using our gifts, talents, skills for the benefit of others. As obedient children of God, which each baptized one of us is, we each have the full support and love of God to continue on successfully, praising and thanking God, or accepting failure for what it is, in good grace and simply moving on; today’s second reading is a clear reference to the solid ground on which we stand in such circumstances as Christians. In that way we cannot let ourselves be destroyed by setbacks when in good conscience we tried our best at whatever activity it was. In the full knowledge of God’s love and support, we turn away and move on. God will never condemn us for failure, for God knows our deepest hopes and ambitions; if they are of God, then all will be well. Always. 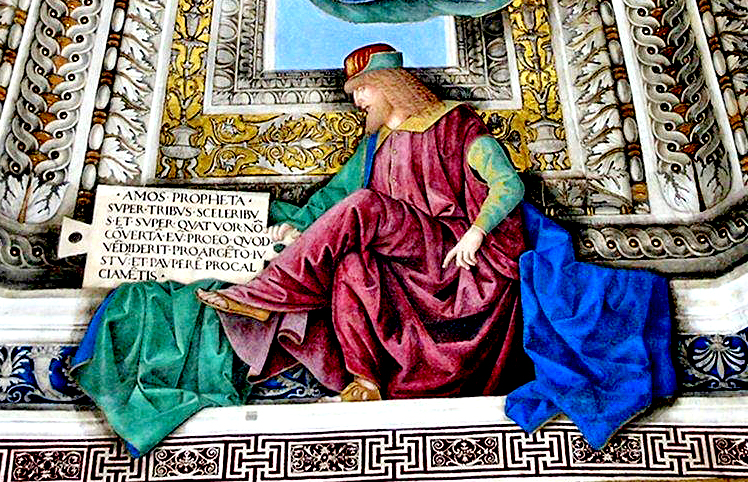 Amos the Prophet, Melozzo da Forli, Basilica of the Holy House, Loreto, Italy. The sign reads: “For three sins, even for four, I will not turn back [my wrath]. They sell the righteous for silver, and the needy for a pair of sandals.” Amos 2:6.