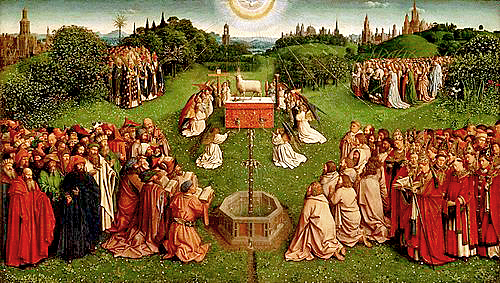 Today’s gospel reveals the source of Jesus’ somewhat unusual title of “Lamb of God”. It comes from John the Baptist who proclaimed Jesus as the mystic lamb who would, as is said at every Mass, “take away the sins of the world”. John does not say what led him to proclaiming Jesus in this way, so we have once more to resort to the Old Testament for clues. It most likely comes from the central event in the history of the Chosen People, the escape from slavery in Egypt to the glory of liberty in the Promised Land of Canaan. You will recall that the king of Egypt had refused 10 times to allow the Hebrews, his slave population, to leave Egypt freely. So the angel of death passed through the land and all first-born males died. The angel, however, “passed over” the Hebrew settlements which had the blood of a spotless slaughtered lamb displayed on the door frames. Hence this lamb was forever associated with escape from slavery and death and leading to freedom and life. John saw in Jesus the author of life, the teacher who would guide us all into the path of truth. So, in a way, he reversed the roles of a timid, retiring lamb, into the champion of the downtrodden and the conqueror of sin and death. So perhaps it is not so surprising that the very earliest images of Jesus, statues from the 4th century, almost always portray him as The Good Shepherd, carrying a lamb:

So Jesus is both lamb and shepherd. This fits well into his identity as both God (shepherd of us all) and lamb (open to the pains, temptations, challenges and weakness of being human). The final New Testament Book of Revelation has a scene with a transformed lamb, apparently slaughtered, but alive. A song of glory is sung:

“You are worthy to take the scroll
and to open its seals,
because you were slain,
and with your blood you purchased for God
persons from every tribe and language and people and nation.
You have made them to be a kingdom and priests to serve our God,
and they will reign on the earth.”       Revelation 5:9b-10.

So this suggests that the blood of the lamb bought us humans for God; that we who were drowning in evil have been made clean and acceptable to the Almighty. All this is deepest mystery and perhaps difficult the grasp. But another layer can be placed upon it to make it perhaps more understandable.

The crucial moment of Jesus’ life was the question thrown at him by the high priest following his arrest in the garden of Gethsemane:

Jesus had four possible answers to this, namely “yes”, “no”, “I don’t know” and silence. Mark, being the earliest and most direct, straightforward gospel of the four, states Jesus as saying “I am” or Ἐγώ ἐιμι (Mk. 14:62) in the original Greek gospel. This emphasizes the “I” in Jesus’ answer which cannot be really rendered correctly in English. But the consequence is devastating, leading directly to his condemnation to death for blasphemy.  Hence he deliberately brought death upon himself by stating what he believed to be true; after all, this was exactly what he had learned and experienced at his baptism, that he was the Anointed (the Christ) of God, and God’s Son. But why do this? Because any other answer would have betrayed his entire mission, his whole life’s work. He had to answer this way. So his death was the perfection of his work: he died for what he believed to be true. And what was that? That we humans are the children of God, that we can have our sins forgiven, that we can be holy and beloved of God in following Jesus’ teachings and that ultimately we can receive eternal happiness in taking on such a life as Jesus wishes us to adopt. All that would have vanished in a trice had Jesus answered (or not answered) in any other way. So the blood of this wholly innocent lamb put the seal on his ineffable teaching which stands for all eternity.

Today’s gospel, therefore, reminds us once more that our belief in the Lord is the way, the truth and the life all of us are invited to accept and live out. By rising from the degradation and squalor of death on a cross, Jesus put the ultimate seal on his teachings and example. We who follow him can hope for the same consequence if we too live and act the way he did. And this we are able to do, not alone, but with the strength of God’s Holy Spirit sent to us by the same Jesus present in the Eucharist, who remains with us to this very day. 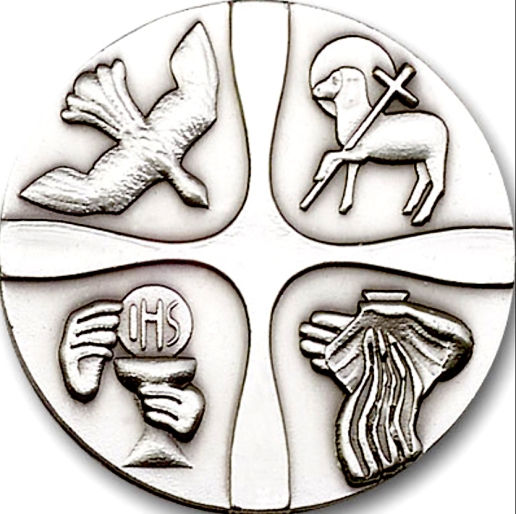