Then a cloud came, casting a shadow over them; from the cloud came a voice, “This is my beloved Son.  Listen to him.”   Mark 9:7.

First a word about the first reading, almost as famous (infamous?) as today’s gospel. It is the sacrifice of Abraham, when God asked the old man Abraham (roughly 100 years old), to sacrifice his only son, Isaac, to God to show how much he believed in the still small voice he had obeyed for some time. And he did!

“Take your son Isaac, your only one, whom you love,
and go to the land of Moriah.
There you shall offer him up as a holocaust
on a height that I will point out to you.” 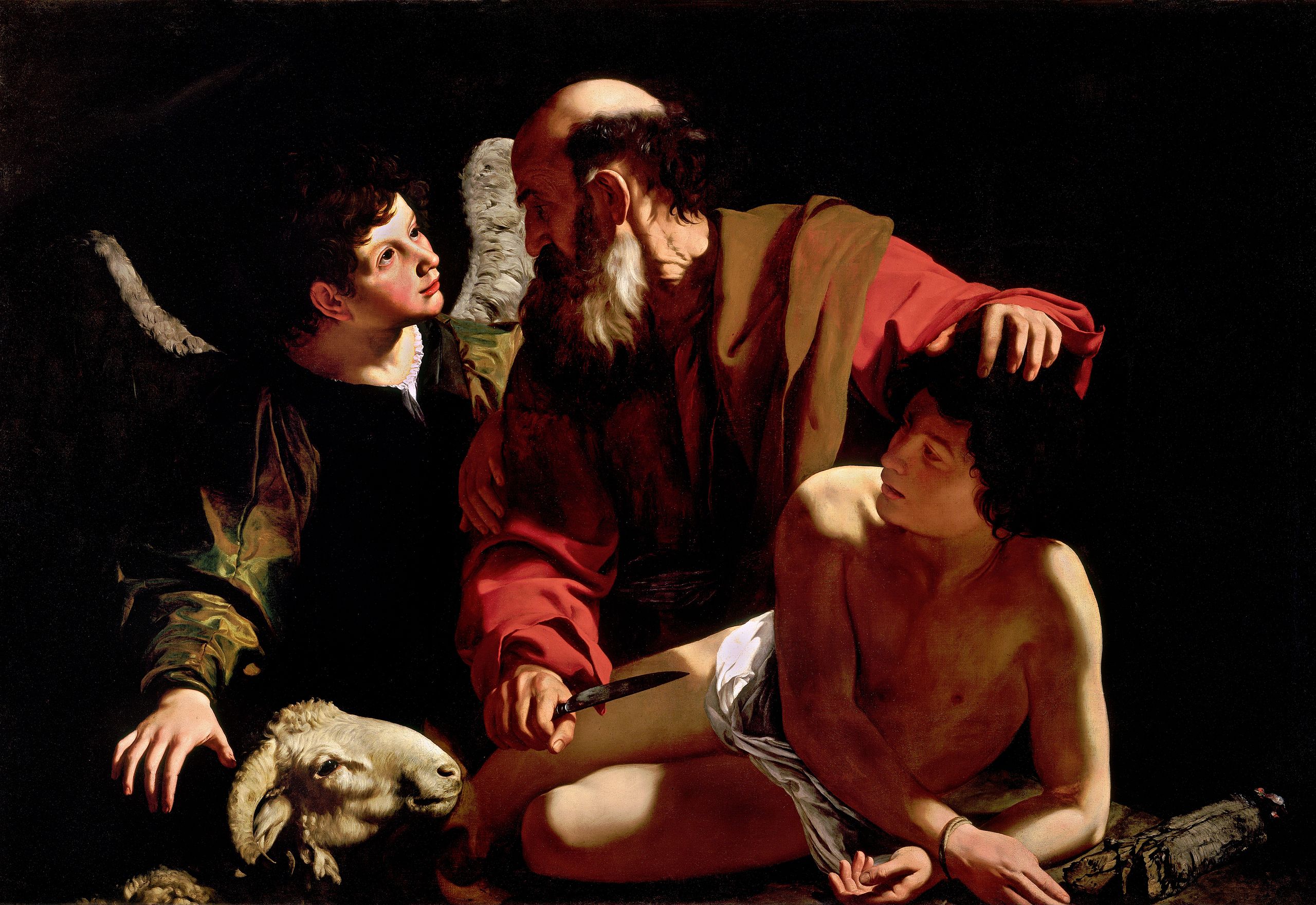 As you can see, an angel intervened at the last moment to save the young man, with God now knowing that Abraham would deny him nothing. Today, that whole scene seems unbelievable, preposterous, stupendously evil. Well, not back then… This event took place in the land of Canaan, perhaps 4000 years ago. At that time, perhaps five people had knowledge of the God we all believe in: Abraham, his wife Sarah, the young Isaac, and Hagar, the mother of Ishmael, Abraham’s son through what we would call surrogacy today. All around them were pagan gods and goddesses by the dozen, and some of them were very scary indeed. Perhaps the reigning horror was Moloch, or Baal. Not having the slightest idea of the real God, people had to construct their own idea of the supernatural, and, not surprisingly, it was based on their own experience. If you wanted something, you had to pay for it, hence it was a kind of bargaining model that you would have with a merchant. So, if you wanted good weather to ensure a good harvest, there was a cost. There being no way to pay gods with money or wealth of any sort, other payment had to be figured out, the ultimate “price” being the sacrifice of children. You would bargain with the gods with life itself. It was logical from their point of view, but certainly not ours, but that was because God intervened, and I believe it was the reason God entered into our history. This abominable practice was simply so horrific it had to be stopped, but stopped in a way that the people of that time would understand. So poor Abraham made no protest about the demand placed on him – it was what was expected; it was normal! God had promised him descendants as many as the stars of the heavens, but he had exactly one son by his wife, and God demanded him as payment for his promise. Placing complete trust in God, Abraham obeyed not knowing how on earth the promise could be fulfilled, but the rest, as they say, is history. The angel, God’s messenger, intervened, Isaac was saved, and salvation history entered a brand new direction, away from the prevailing traditions of that day. James Michener has a vivid passage in what that must have been like in his novel The Source. In the chapter entitled Of Death and Life, he describes the priests having divined that an invasion was imminent from the north, decreed “a burning of first sons” to prevent it, and he proceeds to imagine what the effects of that on a family with a first born son must have been (pp.109-113, The Source, Random House Trade Paperbacks, New York, 2002).

So what on earth has this to do with today’s Mass readings? Well, it took a quite some time to eliminate all child sacrifice even from God’s Chosen People as it was a deeply engrained Canaanite practice. So there was almost certainly a memory of all this even at the time of Jesus. God obviously wanted Jesus to be clearly recognized as the Son of God, as God’s voice declared this at his baptism, and at today’s commemoration of the Transfiguration, plus the demons recognized him as God’s Son (seen two Sundays ago in the gospel), and at the Annunciation, the angel Gabriel told Mary that Jesus would be Son of God. St. Peter himself recognized Jesus as Son of God in Matthew 16:17, and onwards through the New Testament and, tellingly, at the crucifixion: “…if you are God’s Son, come on down from that cross” (Matthew 27:40). But this time, the Son died. There was no angelic intervention, only an agonized wait for death to triumph.

So Jesus’ followers had to be certain that this man was, indeed, Son of God, and the Transfiguration played a large part in convincing them. They saw with their own eyes Jesus talking to the two towering figures of the Scripture, Moses and Elijah, one representing the Law of God, and the other the Prophecies of God. And so, as today’s second reading tells us, if God did not spare his only Son to prove his love for all of us, what could be possibly denied us as we seek life eternal? God’s love for us is utterly unlimited, unconditional, as has been proven; this Lent perhaps it is now a good moment to examine our own lives to see if we have returned that love in the same, limitless, way.