The Synagogue at Capernaum, late 4th century, built upon the foundations of Jesus’ synagogue.

Sunday’s Mass Reading can be found by clicking here.

As [Jesus] was walking by the Sea of Galilee, he saw two brothers, Simon who is called Peter, and his brother Andrew, casting a net into the sea; they were fishermen. He said to them, “Come after me, and I will make you fishers of men.”    Matthew 4:18-19. 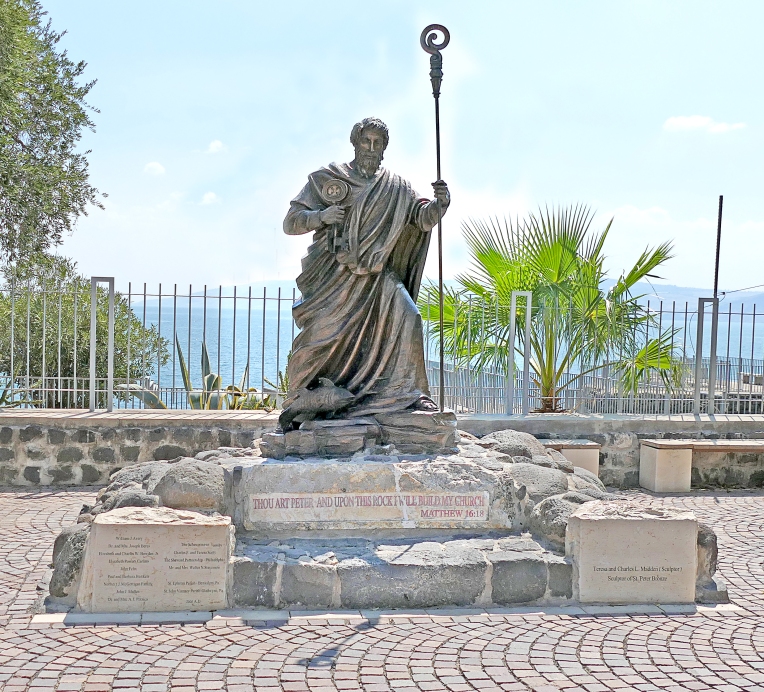 Statue of St. Peter, Madden, Sculptor, 2000 CE, Caperneum, Israel. (The Sea of Galilee in the background).

Last year, Pope Francis declared the Third Sunday in Ordinary Time to be celebrated as Word of God Sunday. That day is to celebrate the great book containing God’s very words. In the coronation of Queen Elizabeth II in June, 1953, the Moderator of the General Assembly of the Church of Scotland, alongside the Archbishop of Canterbury, presented the Queen with a bible. The Archbishop said, “…we present you with this Book, the most valuable thing that this world affords”.  Then the Moderator said, “Here is Wisdom; This is the royal Law; These are the lively Oracles of God”. Note “Lively”. That means full of life. The bible contains all that is necessary for a happy and fulfilled life here on earth, and provides a pathway to heaven itself. If one follows these Oracles, the result is happiness and fulfillment. Now let us look at today’s gospel.

On February 10 last year, the 5th Sunday in Ordinary time, we heard St. Luke’s description of the call of Peter. Try to find it (do a search for “Peter” and you’ll get there eventually). That reveals my take on this event, perhaps a little too “lively” in the secular sense to make it into Scripture. It shows how a hard-bitten, hard working man such as Peter was overwhelmed by the presence of Jesus, despite what I think he might have said when Jesus told him to pull out and fish again. Matthew omits that episode, but does of course put in the effects of the encounter: Peter drops everything to become a disciple. On 17 January, we celebrated the feast of St. Anthony, recognized as the founder of monasticism. He too dropped everything and walked out into the desert in order to get closer fo God and away from the distractions of the world. We still have today, though the numbers have sadly declined, men and women prepared to give up everything and follow a life dedicated only to God and follow the lively Oracles contained in God’s word. So the power is still there even now, when Isaiah’s words in the first reading are once more fulfilled: “The people who walked in darkness have seen a great light; upon those who dwelt in the land of gloom a light has shone. You have brought them abundant joy and great rejoicing….” But let me not forget those who have not embarked on such a life, the vast majority of people. These are still “in the world” but through these same lively Oracles, we all have the same identical invitation to live a life fulfilled and holy leading to eternal happiness. Indeed, Paul’s letter today is addressed to just such people, who are arguing madly about who has the greatest and most effective teacher, just like today’s arguments about who is the greatest Yankee pitcher or best Manchester City striker. Except those people in Corinth argued about who was more likely to get them into heaven! Paul quickly puts them to rights: only Jesus, always Jesus and he alone is to be their – our –  teacher. In him you trust, in his words you place your hope, his example you follow to the very best of your ability. 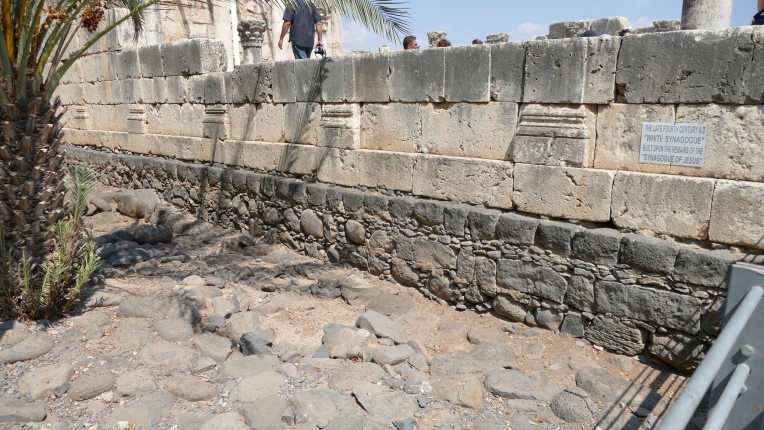 The ruins of the ancient synagogue at Capernaum in Galilee; the big black stones are the floor of the synagogue in Jesus’ time, where he would have walked.

Today’s challenges, which are monumental and certainly enough to reduce us to despair should we let them, can be tamed, controlled and overcome with the application of Jesus’ words. If we each love the other, if we trust in God’s presence here and now, if we act accordingly (and that is by no means easy or simple), these challenges can be met. They require sacrifice, never popular in the secular world; climate control demands courageous decisions, income equalization demands massive changes, corruption elimination requires courage and clarity and strength. And on and on. The simplicity and honesty of the Lord should be our constant model, his resilience our guide. It is as if, in fact, we are being asked to drop all number of privileges and wealth for the greater good, as the saints have done through the centuries, modeling St. Peter in today’s gospel. This attitude would offer the world hope, which is in short supply. But it seems, as the days go by, that we, among the wealthiest people in the world, will be asked for such sacrifice to preserve our planet. With God’s help, and our trust in that, it is possible, as the lively Oracles of God guide our way to doing what is right and good. 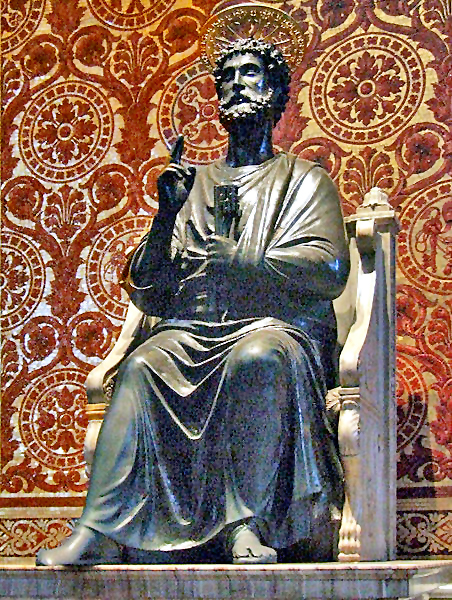