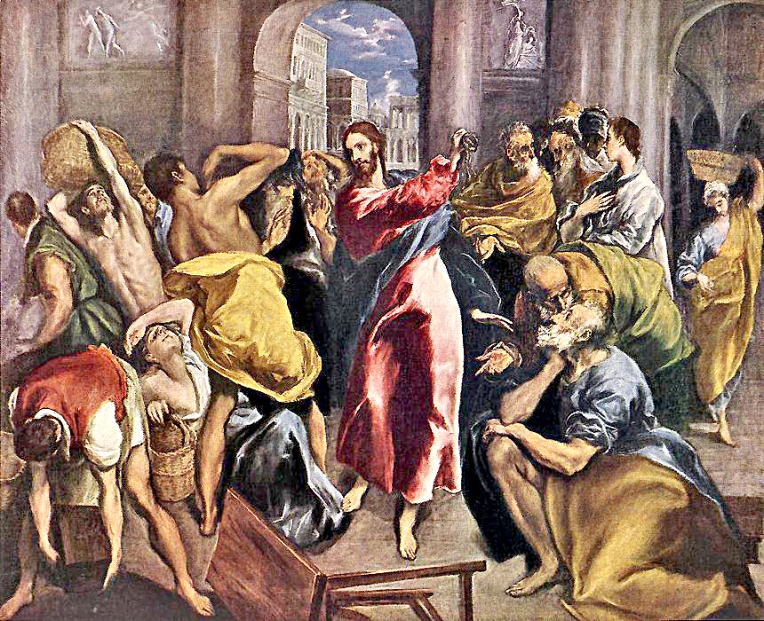 [Jesus] drove them all out of the temple area, with the sheep and oxen,
and spilled the coins of the money changers
and overturned their tables,
and to those who sold doves he said,
“Take these out of here,
and stop making my Father’s house a marketplace.”             John 2:15-16

Today we depart from Mark’s gospel and enter the far more mystic, spiritual, atmospheric gospel of John. Scholars are pretty convinced that this was the last gospel to be written down, and it is certainly the most expansive. Whereas Mark begins with Jesus’ baptism and ends with an empty tomb, John’s gospel, together with the Book of Revelation, traditionally coming from John’s hand also, begins before time starts, and ends with the Last Judgement! It is also quite distinct from the other three gospels. For example, today’s gospel passage speaks of Jesus going to Jerusalem to celebrate the great Jewish feast of Passover, and this virtually at the beginning of his ministry. There are three more times John has Jesus in Jerusalem. In the other three gospels, called the “synoptic” gospels, Jesus goes precisely once, at the end of his ministry, and is killed within five days of his arrival. Again, scholars tell us that John is probably the more accurate, as going to the temple in  Jerusalem for the big feasts is something a strict Jewish man would do if he could.

The Temple in Jesus’ time was not the temple built by King Solomon. That has been destroyed in an invasion by the Babylonians centuries before. It had been rebuilt, and then extended by King Herod just before Jesus’ birth. It is also worth noting that the first temple was built to house the Ark of the Covenant, created just after God had handed down the 10 Commandments to Moses on two stone tablets, which were placed inside the Ark. That was placed in the Holy of Holies, the heart of the temple, into which only the high priest could go, once a year, to commune with God. The Ark vanished, never to be seen again, when the Babylonians invaded Jerusalem and destroyed the temple. There are many theories as to where it went, if it was not destroyed along with the temple. The most fascinating is that it is kept in the church of Our Lady of Sion in Axum in Ethiopia, but is never shown to anyone and is guarded night and day. Ethiopia, an ancient Christian country, has a special devotion to the Ark, so one wonders….

At the time of Jesus, however, the second temple was the center and focus of the Jewish faith in God, Ark or no Ark. The Levites were the special officers of the temple. It was where humanity communed with the Almighty. This goes some way to explaining Jesus’ extraordinary reaction to seeing businessmen at work within the temple area, turning it, in Jesus’ word, into a marketplace. I have been in Christian churches which have had “holy” shops in them selling prayer books, pictures, rosaries, etc., but once in Norway I went into a church which had a cafe at the back. I didn’t do a Jesus there, but I was tempted. Churches should not smell of bad coffee! In Jesus’ case, the temple should not smell of profit! As he said at another time and place, render to caesar what is caesar’s, and to God what is God’s. In the temple, the time and place is for God and nothing else. If that was not clear enough, today we have the origin of the 10 Commandments given in the first reading. It is clear that Jesus was acting directly out of the first of the commandments. Having no other God but God is a likely candidate, especially in the temple of all places. If it was on the sabbath (the gospel does not say), then his outrage would be even more understandable, springing from the third Commandment. The lesson is clear: God first and above all other things. Nothing should work against that ideal and reality. In certain places and at certain times, this should be crystal clear. In the temple there can be only one reality, God.

So, what Lenten exercise does all this suggest? It seems to invite us to look inside our own souls, our own temple if you like, and see if anything other than the divine is lurking there. Is God first, last and always, the foundation and reality we find there? Or are there other realities there, such as the money god, the drug god, the tobacco-smoking god, the sex god, the work god, the power god? If so, then Lent is the perfect time to confront such evils and ask God to exorcise them. In that way we become true disciples, as our dignity as children of God demands, so that we can pursue our vocation more powerfully in loving God, neighbor and self in the way God’s gifts enable us. Ask the Lord to do a Jesus inside your soul and drive out what should not be there. It might be painful, but even Jesus made a whip to expel evil. And he succeeded. 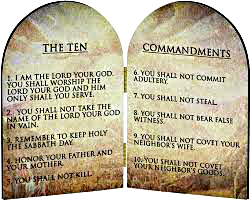 If this website has been helpful, interesting or even inspiring for you, please share it – SundayMassReadings.com – with your friends and acquaintances. Thank you.  RJC